Michael Dunlop will race a Team Classic Suzuki GSX-R750 SRAD at this year’s Manx GP, which takes place from 21-29 August on the Isle of Man.

There are OZ wheels, Brembo brakes, and K-Tech suspension, while the triple clamps, footrests and fork lowers are made in-house.

Dunlop, continuing his long-standing association with Team Classic Suzuki, tested the bike at the Cartagena circuit in Spain earlier this year, and will contest the Manx GP’s classic superbike race, a race he has previously won on the team’s XR69.

Alongside Dunlop, Team Classic Suzuki will also support Phil Crowe, who will be campaigning one of the team’s XR69 machines.

Team owner Steve Wheatman, said, “We’ve worked with Michael for a long time and have an excellent working relationship. We know what he is capable of, and I think he knows our commitment to giving him a bike he can win on around the Mountain Course. After much success with the XR69 it was time to move onto something new, and the SRAD not only gives us a new challenge, being that bit more modern it obviously has a racing advantage of the old F1 bike. But, practical and competitive benefits aside, it’s also one of the most iconic superbikes of all time, and it defined a generation of superbike fans. We’re just as excited as they will be to see a GSX-R750 SRAD race around the Isle of Man again.”

Raced by the likes of James Whitham and John Reynolds in World Superbikes and Chris Walker in BSB, the GSX-R750 SRAD epitomises 1990s sportsbike-obsessed Britain, in part thanks to its bulbous seat unit and now-iconic silhouette. The ‘Gixxer’ became an incredibly frequent sight at bike meets up and down the country.

The Team Classic Suzuki SRAD livery is inspired by the Lucky Strike-sponsored endurance bike it began life as, a livery more commonly associated with the RGV500s ridden by likes of Kevin Schwantz in Grand Prix. 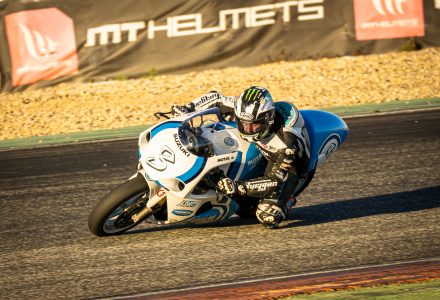